Peripartum Cardiomyopathy (PPCM) (also known as Postpartum or Peripartum Cardiomyopathy) is a form of heart failure that happens during pregnancy or after giving birth. As the left ventricle of the heart becomes enlarged and the percentage of blood that is ejected with each contraction decreases, the heart is no longer able to meet the demands of the body's organs for oxygen. Consequently, the kidneys retain fluid in the body, and this fluid causes the heart to work harder and become weaker, leading to more fluid retention. This is a vicious cycle and the excess fluid puts pressure on the organs; causing electrolyte imbalances, kidney and liver failure and can ultimately lead to blood clots causing stroke, heart attack and death. Heart failure is essentially, a condition where a person drowns in their own fluids.

Some basic information about the heart.

Below is a diagram of a normal Heart and a heart with an enlarged, weakened left ventricle. (Diagram courtesy of Julian Andrewartha) 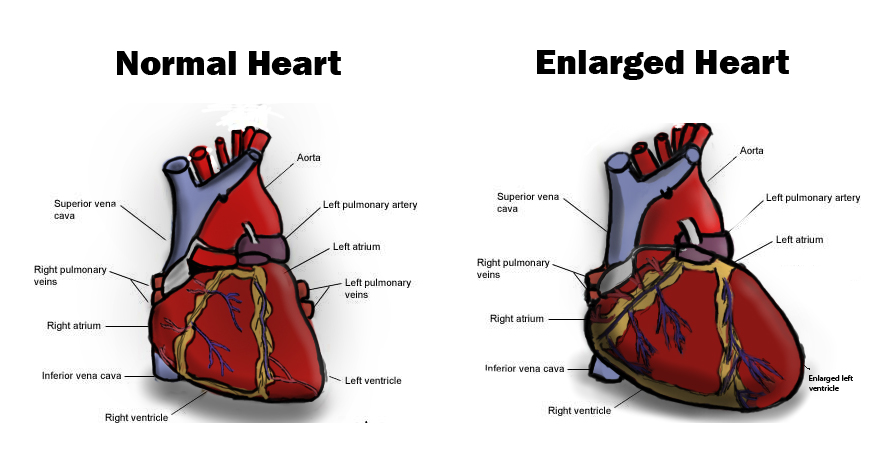 What are the signs?

All women should know the symptoms of heart failure and know when to seek medical help. A woman may initially exert one or all of these symptoms, and many will have their symptoms dismissed as normal signs of pregnancy.

The problem with heart failure is that the heart can compensate for damage and enlargement that makes it difficult to diagnose without an array of tests. The echocardiogram is the only test that definitively diagnoses heart failure and the severity of left ventricle dysfunction but is usually only given if there is a high suspicion of heart failure.

If you feel that something isn't quite right, and you think you may have PPCM do not hesitate to contact your health care provider and raise your concerns.

There is a quiz that has been developed by Dr. James Fett. You can return to the homepage for the Heart Failure Quiz or use the onscreen version below. We have had reports that the quiz may not always work. Other things to look out for are elevated blood pressure and heart rate, poor oxygen saturation levels and unusual weight gain. Occasionally a person's heart can do such a good job compensating, that they exhibit only one or two of the symptoms listed above.

Heart Failure Quiz (Source – Dr. James Fett ) Please note: that with all tools, there is always the possibility of a false negative or false positive, so if in doubt, please see your doctor and order the relevant blood tests or echocardiogram.

5 or more = high risk -- do blood BNP, CRP, and echocardiogram

C-reactive protein is produced by the liver. The level of CRP rises when there is inflammation throughout the body.

Many heart sisters have struggled to obtain a diagnosis, often having their symptoms dismissed as symptoms of pregnancy. A diagnosis is usually made after a woman has already gone into life threatening heart failure. An unusual chest x-ray and ECG, may lead to an ECHO, which is an ultrasound of the heart. A full study takes about an hour and the size of the heart is measured, function analyzed and EF calculated. EF generally correlates to how well the heart is functioning. An EF of 50% is considered low normal. An EF of 55% - 70% is considered normal. What this means is that for every beat the heart makes, 55-70% of the blood in the left ventricle is pumped out to the rest of the body.

The ultrasound for a diagnosis of PPCM, will show an enlarged left ventricle, and EF of less than 50%. EF means Ejection Fraction. A normal heart pumps out just over half the heart's blood volume with each beat. For an EF of less than 50%, the heart has to work harder to pump blood around the body and because the heart is not functioning properly fluid builds up in the body. Often by the time a diagnosis is made, fluid has already accumulated in the body and a diuretic is given to help remove excess water from the body through urination and heart medication is prescribed to assist in recovery by allowing the heart to rest.

Why does it happen?

Pregnancy is stressful and a time of great change in a woman's body. During pregnancy the blood volume increases by 30 to 50% to nourish the growing baby. During pregnancy a women’s immune system is suppressed to prevent her from rejecting the baby and after birth, the immune system resets and it is at this critical time that problems generally occur. A common complaint is a feeling of heaviness in the chest and women may dismiss the cause of this to their milk coming in, instead of heart failure.

There is strong evidence that PPCM itself is an autoimmune disease” Zinc, vitamin D, magnesium, potassium and iron deficiencies may play a role in the development of PPCM and such deficiencies are widespread throughout the community. There are even suggestions, that undiagnosed allergies, can lead to autoimmune dysfunction where the body mistakenly attacks the heart cells. It is likely that there are multiple factors that lead to the development of PPCM but possibly the most difficult message to understand is that pregnancy can be dangerous and deadly, and most women think it can never happen to them. Whether childhood vaccination contributes to poor immune system function later in life and triggers PPCM has not been investigated but it cannot be ruled out.

When the heart cells get damaged, the heart starts to balloon out and enlarge and the heart will also beat faster or slower because less blood is being pumped out. Fluid builds up in the body because the heart is not pumping properly and this puts more and more strain on the heart causing it to enlarge even more. It is a vicious cycle, complicated by the fact that the heart is being attacked and cardiomyocytes (heart cells) are dying. No one knows why the heart is attacked and there are several theories postulated. Researchers are investigating cardiotropic viruses, autoimmunity or immune system dysfunction, other toxins that serve as triggers to immune system dysfunction, micronutrient or trace mineral deficiencies, and genetics as possible components that contribute to or cause the development of PPCM. Stress may also be a trigger.

Recent research suggests that PPCM may be a vascular disease. During pregnancy, the woman's body produces thousands of extra miles of blood vessels to feed the growing baby and large quantities of antiangiogenic factors are secreted to help prevent excessive bleeding as the placenta is delivered, severing the extensive vascular network between mother and fetus. It is in these last months of pregnancy and the time after delivery that PPCM develops. If PPCM develops early on in the pregnancy, the first life to be endangered is that of the unborn child.

Healthy, young women with no previous signs of heart disease can develop heart failure in pregnancy and die very suddenly. Vigilance and education is the key to saving lives. Everything you ever learnt about heart disease being caused by smoking, lifestyle, diet, stress, alcohol etc does NOT apply to PPCM. The cause is unknown. In fact, non-smokers have a higher incidence of PPCM than smokers.

What happens when a woman’s heart fails?

When a woman’s heart fails to pump sufficient blood to supply her body, the first signs may be dizziness but the symptoms become more severe as bodily organs do not receive enough blood or high blood pressure puts a strain on the kidneys and other organs, so they start to malfunction. When the kidneys start to fail, protein is lost, nutrients are lost, and it is one of the organs that start to shut down. The brain is denied oxygen and a woman may struggle to think clearly, be tired, have vision problems and may even develop a clot that leads to a stroke. When troponin rises to critical levels, a heart attack ensues. The progression from first symptoms to complete heart failure can occur hours after delivery, some women have very rapid deterioration whilst others may take weeks or even months to progress to complete heart failure. Sadly many women have died of heart failure in pregnancy.

Who does it affect?

According to the Temporal Trends in Incidence and Outcomes of Peripartum Cardiomyopathy in the United States, nationwide population study (2004‐2011), African–American group represented the highest incidence of Peripartum Cardiomyopathy. Interestingly, PPCM rates were higher in women who were non‐smokers, primipara, or had single gestation pregnancy. The mean age of the overall cohort was 30.3±7.0 years with 85.5% of women in the 20 to 39‐year age group. African Americans (47.5%) constituted the highest proportion of patients with PPCM. 38.6% of patients had median household income in the first quartile. The South had the highest proportion of PPCM patients (48%). Most women with PPCM were hospitalized in large, urban, teaching hospitals. Most common co‐morbidities in women with PPCM were anemia (30.5%), chronic hypertension (30.3%), fluid and electrolyte disorders (21.3%), obesity (13.9%), chronic pulmonary disease (11.6%), and preeclampsia (11.3%). Only 0.3% of all women with PPCM were multipara. http://jaha.ahajournals.org/content/3/3/e001056.full

However, the bottom line is that the disease can affect anyone. Even if you eat well, exercise, and do all the right things, PPCM can affect you.  The triggers of PPCM are unknown. Zinc deficiency in the soil may contribute to the development of PPCM putting many women at risk because zinc has increasingly become depleted in the soil due to industrial farming practises and even organic food may be zinc deficient.

PPCM is an inflammatory disease and the disease is treated with standard high blood pressure drugs such as ace inhibitors and beta blockers and a diuretic (to remove excess water from the body).  These drugs stop the immune dysfunction and give the heart a rest, so it is able to heal. It is believed that the foetal cells circulating in the mother’s body repair her heart. Women can recover within weeks of complete heart failure, though more usually within months but recovery has been observed to happen over many years too, where seemingly little progress is made and then suddenly several years later, a woman's heart recovers completely.

Women also report that walking helped tremendously in their recovery and some women also take dietary supplements like Coq10, zinc, magnesium, vitamin D, omega 3 and 6 supplements, vitamin C, vitamin E, and selenium and iron to assist in healing and to correct deficiencies.

Women are put on a low salt diet because salt holds water in the body and means more work for the heart.  Salt also increases blood pressure.

For more information See Recovering from PPCM and Future Pregnancies

Myheartsisters.com has been developed to raise awareness about Peri and Post Partum Cardiomyopathy and is used for educational purposes only. We encourage you to consult with health care professionals to obtain medical advice. This site contains personal accounts of heart failure in pregnancy. Information should not be used as an alternative to seeking professional medical help, where a proper evaluation or diagnosis can be made in person through a face to face consultation and medical tests.